We were invited to the inter-school Aero Wars 2022 competition which was held on Saturday, 19th of March this year at the Trace City – Maradana. This event was organised by the Centre for Global Education. The competition was to build model planes using the parts given within a time frame. There were 7 teams from different schools including our school and we were the only girls’ school that took part in the competition. 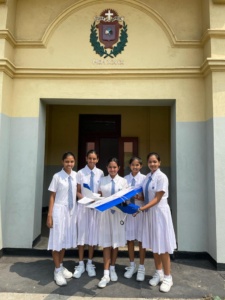 Initially they gave an introduction on how to build the aircraft and about the functionality of it. Later in the day the competing teams we were provided with all the parts and were given 1.5hours to build the model aircraft. After a break the taxing session took place, where the build model planes had to be sent along the ground using a remote control that was linked to its in-built mechanical unit.

Ananda College emerged as the winner for the Aero Wars 2022. We were given special mention as the first time participating girls school who successfully completed our model plane with minimum experience.

Our team enjoyed every minute of the competition. The students who participated are so grateful for our principal and the teachers who were in-charge of this in giving them the opportunity to represent the school and learn a new area through this practical experience.

We are hoping to send our school teams to similar competitions in the coming years, and the interest sparked by this team has now lead to the starting of an Aeronautical Club for students of grades 6 to 13 at school.